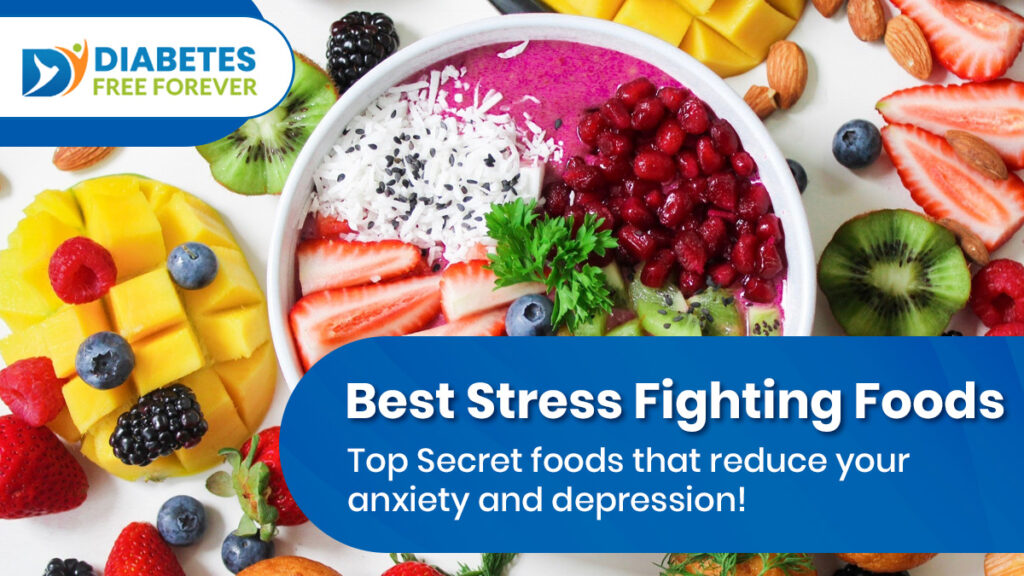 Best Stress Fighting Foods that you must try! Secret foods that reduce your anxiety and depression!

When you’re stressed out, the foods that you’re turning to are most likely going to be traditional ‘comfort’ foods – think big meals, take-out, fatty foods, sweet foods, and alcohol. Let’s face it – we’ve all found some comfort in a tasty meal and a bottle of beer or glass of wine when we’ve been stressed out or upset about something. However, this isn’t a good permanent solution.

When you’re turning to unhealthy foods you can feel better temporarily, but in the long run, you will feel worse. When your body isn’t getting the right nutrition, you can begin to feel less energetic, more lethargic, and in some cases less able to concentrate and focus. All of this can lead to even more stress.

If you’ve been feeling more stressed out than usual lately, it’s important to know which foods are best to choose and which to avoid when it comes to combating stress and helping you to deal with feelings of stress and anxiety. The best way to fight stress is to have a healthy, balanced diet which includes a moderate amount of each of the different food groups.

Filling up on foods such as whole grains, leafy vegetables, and lean proteins as the basic staples of the diet is the best way to ensure that your body gets the optimum amounts of nutrients to fight both physical and mental health problems. When it comes to choosing the foods to eat, some have a range of great properties which help the body combat stress. Choosing these stress-busting foods will help to heal and calm your mind in the long run, rather than providing a temporary fix.

Some of the best stress-fighting foods include:

•          Blueberries – If you’re feeling stressed out and reaching for the snacks, swapping chocolate or chips for one of the best superfoods is a great way to help you deal with your stress levels and achieve a higher level of calm. Blueberries have some of the highest levels of antioxidants, especially antho-cyanin, which means that this berry has been linked to a wide range of health benefits including sharper cognition, better focus, and a clearer mind – all of which can help you to better deal with stress.

•          Chamomile Tea – Of course, it’s not all about what you’re eating when it comes to managing stress; what you’re drinking can also alleviate or worsen the stress you’re feeling. Drinking liquids which are high in sugars and caffeine, such as coffee, energy drinks or soda, can actually increase your stress levels if consumed regularly. Chamomile tea has long been used as a natural bedtime soother, and it has also been used in clinical trials, which determined that chamomile tea is effective in reducing the symptoms of generalized anxiety disorder.

•          Chocolate – Although it’s usually seen as an unhealthy treat, there is an undeniable link between chocolate and our mood. Studies have shown that eating chocolate can actually make you happier. However, that doesn’t mean that you can start munching on chocolate bars every time you’re stressed out – chocolate works best as a de-stressor when eaten in moderation and as part of a healthy and balanced diet. Dark chocolate in particular is best for you, as it contains more flavonols and polyphenols, two hugely important antioxidants which can help combat stress, more than many fruit juices.

•          Oatmeal – Oatmeal is great in that it can be a filling comfort food, but also has a large number of healthy properties to actually make you feel better from the inside out. A complex carbohydrate, eating oatmeal causes your brain to produce higher levels of the feel-good chemical serotonin, helping you to feel calmer and less stressed. Studies have shown that kids who choose oatmeal for breakfast tend to be much sharper throughout the morning in school compared to kids who had alternative morning meals.

•          Walnuts – If you’re looking for a healthy snacking option which will help you to stay better in control of your stress levels, walnuts are a great choice. There is no denying the sweet, pleasant flavor of walnuts and they can be a tasty snack for in-between meals or as part of a desert. A versatile nut, walnuts are great for salads, or add them to a sweet treat such as coffee and walnut cake.

•          Pistachios – another food which is great for snacking on and can also help to combat stress and anxiety in the long term is pistachios. Studies have found that simply eating two small, snack-size portions of pistachios per day can lower vascular constriction when you are stressed, putting less pressure on your heart by further dilating your arteries. Along with this, the rhythmic, repetitive act of shelling pistachios can actually be quite therapeutic!

•          Green Leafy Vegetables – leafy, green vegetables should be a pivotal part of anyone’s diet. Along with helping to combat stress, leafy greens are full of nutrients and antioxidants which help to fight off disease and leave your body feeling healthier and more energized. Dark leafy greens, for example spinach, are especially good for you since they are rich in folate, which helps your body to produce more mood-regulating neurotransmitters such as serotonin, which is a ‘feel-good’ chemical. Making leafy greens a part of your diet will help you to feel happier and less stressed out overall.

Planning your meals wisely is key to not only staying physically fit and healthy, but also to staying mentally strong and being able to best manage your levels of stress. Knowing which foods to avoid and which are the best to reach for to snack on when you’re feeling worried and anxious is important to helping you get control over your emotions and fears.

When you’re feeling stressed, you may be tempted to reach for foods which are laden with sugar, very starchy, or greasy. However, although these foods can make you feel momentarily better, they will actually make you feel worse in the long run.

Having stress-busting snacks such as fresh berries, dark chocolate, yogurt, walnuts or pistachios, or even a fruit smoothie with leafy greens in it can help you to feel better in both the short and long term when it comes to stress.When it comes to combating and dealing with stress in the long run, it’s important to make sure that for the most part, you are eating a diet which is healthy and balanced.

In order to stay on track, it’s a good idea to make a meal plan for your week and plan ahead to make sure that you have a good selection of these stress-busting foods in your kitchen to make meals and snacks from when you’re feeling like stress-eating. Making sure that the majority of your meals include foods such as lean proteins and leafy green vegetables will not only make you feel healthier overall, but can improve your mental health and stress levels, too.

A good example of a healthy, stress-busting menu would be:

Breakfast: Oatmeal with berries or a fruit smoothie with leafy veggies and berries

Mid-morning snack: Natural yogurt with fruit or a handful of pistachio nuts

Lunch: A salad filled with plenty of leafy greens

Dinner: grain based dish with vegetables

Of course, you don’t need to stick to this menu – but it gives you a good idea! Remember to exercise good portion control when eating foods such as nuts, chocolate or yogurt! As the saying goes, you are what you eat – so make sure that first and foremost, you’re filling yourself up with foods which are good for your mental health. To learn more about “Diabetes & Lifestyle Management Program“, register for our upcoming free webinar @ https://drbhagyeshkulkarni.com/free-webinar-diabetes-lifestyle-management/